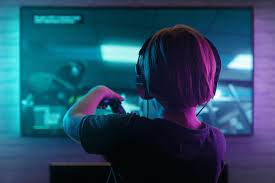 Video gaming is a very popular leisure activity among adults (Pew Research Center, 2018). The amount of time spent playing video games has increased steadily, from 5.1 h/week in 2011 to 6.5 h/week in 2017 (The Nielsen Company, 2017). Video gaming is known to have some benefits such as improving focus, multitasking, and working memory, but it may also come with costs when it is used heavily. By spending a predominant part of the day gaming, excessive video gamers are at risk of showing lower educational and career attainment, problems with peers, and lower social skills (Mihara and Higuchi, 2017). On the one hand, video game use is widespread, and it may come with certain precursors as well as consequences. On the other hand, little is known about the relations between various video gaming habits and psychological functioning. This study aims to shed light on these important relations using a large sample.

A video game is defined as “a game which we play thanks to an audiovisual apparatus and which can be based on a story” (Esposito, 2005). In the last few years, the amount of scientific research devoted to video game playing has increased (e.g., Ferguson, 2015; Calvert et al., 2017; Hamari and Keronen, 2017). Most scientific studies in this area of research have focused on the extent of video game play and its diverse correlates. While some researchers have emphasized the benefits of game playing and even suggested a therapeutic use of video games (Primack et al., 2012; Granic et al., 2014; Colder Carras et al., 2018), others have been intrigued by its potential dangers (Anderson et al., 2010; Müller and Wölfling, 2017).

Parents and professionals may be worried about their excessively playing children being “addicted.” However, problematic and potentially addictive video game use goes beyond the extent of playing (in hours per week; Skoric et al., 2009). It also includes such issues as craving, loss of control, and negative consequences of excessive gaming. While it is still a matter of debate whether problematic video game play should be considered a behavioral addiction, its status as a mental disorder has been clarified since the release of the DSM-5 in 2013. In the DSM-5, the American Psychiatric Association (2013) defined Internet Gaming Disorder with diagnostic criteria closely related to Gambling Disorder. Generally, this decision has been supported by many researchers (e.g., Petry et al., 2014) but has also caused controversies. Researchers have criticized the selection of diagnostic criteria and the vague definition of the Internet Gaming Disorder construct, which excludes offline games from being related to addictive use (e.g., Griffiths et al., 2016; Bean et al., 2017).

Several studies, literature reviews, and meta-analyses have focused on the correlates of problematic video gaming, usually assessed as a continuum with addiction marking the upper end of the scale (e.g., Ferguson et al., 2011; Kuss and Griffiths, 2012). The degree of addictive video game use has been found to be related to personality traits such as low self-esteem (Ko et al., 2005) and low self-efficacy (Jeong and Kim, 2011), anxiety, and aggression (Mehroof and Griffiths, 2010), and even to clinical symptoms of depression and anxiety disorders (Wang et al., 2018). Potential consequences of video game use have been identified as well, such as a lack of real-life friends (Kowert et al., 2014a), stress and maladaptive coping (Milani et al., 2018), lower psychosocial well-being and loneliness (Lemmens et al., 2011), psychosomatic problems (Müller et al., 2015; Milani et al., 2018), and decreased academic achievement (Chiu et al., 2004; Gentile, 2009). Effect sizes have varied widely across studies (Ferguson et al., 2011). There seem to be sex and age differences with regard to video gaming behavior: potentially problematic video gaming was found to be more likely among males than females (e.g., Greenberg et al., 2010; Estévez et al., 2017), and among younger gamers (Rehbein et al., 2016).

In addition to looking at problematic video game use and its relation to psychological functioning, it is relevant to also focus on why individuals play video games. Players use video games for very different reasons (Ryan et al., 2006; Yee, 2006) such as to distract themselves from daily hassles or because they enjoy the social relationships they have developed in the virtual world. Potentially problematic video gaming has been found to be related to various reasons for playing such as coping and escape (Hussain and Griffiths, 2009; Schneider et al., 2018), socialization (Laconi et al., 2017), and personal satisfaction (Ng and Wiemer-Hastings, 2005). Coping (Laconi et al., 2017), social interaction, and competition were among the main reasons for gaming among males but not among females (Lucas and Sherry, 2004). Mixed results emerged concerning age differences (Greenberg et al., 2010), but especially younger gamers seemed to be motivated for video gaming by social interactions (Hilgard et al., 2013). However, so far it remains unclear to what extent people’s various reasons for playing video games are differentially related to their psychological functioning.

Related Topics:PsychologicalVideo Gaming
Up Next