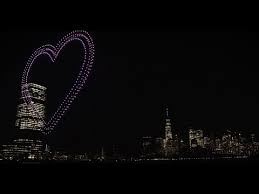 NEW YORK, Nov. 4, 2022 /PRNewswire/ — Candy Crush Saga, the iconic match-3 mobile puzzle game that hosts millions of players every day, is celebrating 10 years of fun, billions of candies matched and countless moments of joy for players across the globe. To mark the occasion, downtown Manhattan was transformed into a candified carnival. Viewers enjoyed a spectacular takeover of the New York City skyline as hundreds of glowing drones took Candy Crush Saga from the mobile phone to the biggest screen on Earth – the sky.

For 10 sweet minutes, candies were matched at over 1,000 times the size seen on a mobile phone in a stunning performance by 500 synchronized drones. From electrifying Color Bombs to a larger-than-life Tiffi, some of the game’s most iconic elements took flight in the night sky.

Throughout the night, over 1,000 people joined in the fun at Battery Park Esplanade, while listening to a live DJ, Luda Love and enjoying Candy Crush Saga inspired food, drinks, a gigantic, adult, ball-pit, carnival games, and more. Beyond the candified carnival space, the show could be seen by countless New Yorkers from downtown to midtown as well as New Jersey residents across the Hudson.

“We are honored to celebrate such an incredible milestone for Candy Crush Saga,” said Fernanda Romano, Chief Marketing Officer at King. “Candy Crush Saga is one of the most beloved mobile games of all time and remains a daily source of fun in millions of peoples’ lives. We wanted to mark this momentous anniversary by showcasing some of Candy Crush Saga’s most iconic elements in a larger-than-life way above the world’s most iconic city skyline. We’re incredibly thankful to our players around the world who have kept us thriving for the last 10 years, and we are committed to continue making the world more playful for many years to come.”

“We wanted to help tell the Candy Crush Saga story in the most breathtaking way possible,” said Jeff Kaplan, General Manager, Pixis Drones. “The game is brimming with beautiful iconography, but bringing that to life required months of collaboration and the full breadth of Pixis’ engineering and design expertise. The end-product is one of the most sophisticated and vibrant performances we’ve executed, and we’re thrilled to have partnered with Candy Crush Saga to help mark such a special moment.”

Beginning November 4th, on National Candy Day, Candy Crush Saga is providing daily in-game rewards, kicking off the #10YearsOfFun celebrations with unlimited lives across the globe. A flurry of surprises from Color Bombs to Lollipop Hammers and more will be released every day in the lead-up to the official anniversary date on November 14th. Download the Candy Crush Saga app via Apple App Store, Google Play, Microsoft Store, Amazon App Store and Facebook to get in on the fun.

Candy Crush Saga has become a global phenomenon, attracting hundreds of millions of players from around the world. As one of the most played mobile games year in and year out, it’s been downloaded more than three billion times since it launched in 2012. As of Q2 2022, Candy Crush was the top-grossing game franchise in the U.S. app stores for the 20th consecutive quarter. To date, over five trillion levels of Candy Crush Saga have been played in 200 countries and territories.

Follow @candycrushsaga or visit www.candycrushsaga.com to stay updated on all of the incredible global activity to celebrate ten years of Candy Crush Saga.

King is the game developer behind the world-famous Candy Crush franchise, as well as mobile game hits including Farm Heroes Saga, Bubble Witch Saga and Pet Rescue Saga. Candy Crush is the top-grossing franchise in US app stores, a position it has held for the last five years, and King’s games are being played by 240 million monthly active users as of Q2 2022. King, which is part of Activision Blizzard (NASDAQ: ATVI) since its acquisition in 2016, employs nearly 2,000 people in game studios in Stockholm, Malmö, London, Barcelona and Berlin and offices in San Francisco, New York, Los Angeles and Malta.

Sqm Club: Some of The Major Achievements