The Fashion World Pays Tribute to Its “Queen Of Punk,” Vivienne Westwood 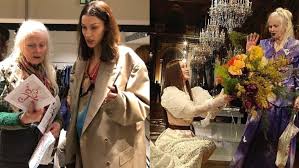 The British designer and activist Dame Vivienne Westwood was a pioneer whose impact on the fashion world was immeasurable. Not only did she consistently deliver groundbreaking designs throughout her six-decade career, but she also used the runway as a platform to telegraph her commitment to political causes from the climate crisis to the blurring of traditional gender boundaries.

Following news of the extraordinary designer’s passing yesterday at the age of 81, Westwood’s industry friends, collaborators, and admirers have been paying tribute on social media, from Naomi Campbell (who famously fell off her teetering platforms on the designer’s fall 1993 runway), Bella Hadid, and Donatella Versace to Marc Jacobs and Stella McCartney. Read some of the most moving tributes to Dame Vivienne Westwood from the fashion world, below.

“Dame Vivienne Westwood was an extraordinary talent: an innovative and influential designer, and an iconoclast who pursued every belief and passion with a rare fervor. One of my very favorite Costume Institute shows, Anglomania, celebrated British fashion, but really it was a celebration of Vivienne. She was at the heart of it all, the designer that every single designer wanted to meet at the gala. She was a provocateur, and one with a deep understanding of what made her homeland tick: that peculiarly British blend of history, class, sex, romanticism, and tradition, which she worked up into the most magical and imaginative of clothes.”

“Dame Vivienne Westwood was a radical visionary with purpose and her lifelong contribution to the British fashion industry was like no other. She challenged convention and created some of the most iconic designs of the twentieth century. My deepest condolences are with Andreas and her family at this time.”

“The original queen of fashion, Dame Vivienne Westwood, wife, mother, grandmother, and friend. I remember as a child riding the bus home from school and driving by King’s Road seeing all the punks with their risk-taking way of dressing and hair. It was revolutionary. I didn’t know then that I would meet Vivienne Westwood in 1986 and not only get to work with her but be able to call her a friend.

“Talk about a change maker, nonconformist, and environmentalist! Vivienne Westwood was ahead of it all! An artist, a punk, a working mother, and also a designer whose brand is still as relevant today as ever. I feel so lucky to have known her a little during an important phase of my career in fashion and to have had that period so beautifully documented by Gavin Bond in his book Being There.

Vivienne once faxed me a handwritten letter inviting me to participate in one of her shows, as one did in the early ’90s. She had recently viewed Da Vinci’s “Lady with an Ermine” and was excited to tell me how much the painting reminded her of me. I am quite sure it was the ermine, not the lady! Thank you, Vivienne, for staying so true to your principles and values and most importantly, for leading the way with spunk and with humor.”

“I cannot believe I am writing this… Today, we lost one of the most rare British icons of fashion ever. Vivienne Westwood inspired my career as a designer with bravery and bollocks. She invented punk.

I remember sitting with her for hours at Juergen Teller’s birthday dinner as she gently analyzed the corner of the tablecloth, folding it with precision like Japanese origami… I realized she was creating a tiny pattern and designing a zero-waste object, with little challenge. She was a genius.

Vivienne invented historic fashion design moments that woke us all up and shook the industry to its core. She led the way forward, never apologizing for exposing unjust wrongs in the world and asking uncomfortable questions.

Vivienne said it like she saw it. She wanted to make fashion better. Vivienne pushed every single boundary and held her head so high. She was cheeky, irreverent, and had the truest fuck-you vibe I have ever known. I have never ever met anyone else like her. I hope more become like her… More fight like her, more create like her, more celebrate like her.

Thank you Dame Vivienne Westwood for all you gave us. You will live on forever. God save Westwood… Punk rock will never die.”

“Somehow I imagined Vivienne living way into her hundreds. She still had so many urgent matters to shed light on, so many causes to support, still so many injustices to be outspoken about… and so many more magical outfits to create. This talented and brilliant lady was so unique and so punk in all the ways punk should be. She did it her way, all the way. I will always be grateful for having been in her inspiring company. Rest in glorious power.”

“Dearest Vivienne, queen of punk. From the first day I met you to the last day I saw you, you made me smile, listen, learn and love more than the day before. I will forever be grateful to have been in your orbit, because to me and most in fashion—and in humanity—you, Vivienne, were the sun. To the coolest, most fun, incredible, humble, creative, badass, intelligent, fucking epic human being that has walked this earth, my inspiration and idol in all things, rest in love and rest in peace…I will miss you. I’m sending my love to dear Andreas and the entire family. She was loved by so many.”

“So sad to hear that Dame Vivienne Westwood has passed away, a total legend. Her studio was the only place I ever did a work placement, over 20 years ago, it was an amazing time. I will remember her always.”

“Dame Vivienne Westwood: her legacy can’t be measured by the fact that she gave the world the interminably copied “punk.” Let’s not forget—she was the first to leave that behind. Thereon, she heroically devoted herself to standing up for civilized critical and radical thinking, constantly using her position in fashion to speak out about the urgency of environmental destruction. I want to say that she was also the most luminously beautiful woman I ever met in fashion—Tim Walker’s portrait captured it. She was uncaring of that though, which made her even more so. She was one of the very greatest British women, always ahead of her time. She was kind, normal, and messianic, all uniquely rolled into one visionary force who had not one jot of grandeur about her incredible standing as one of the most influential designers in the world.

One day, in the ’90s, I wanted to interview her, but I had just had a baby and found it hard to get out. She said she would come to me instead—and cycled over to my flat from hers like that was completely ordinary. Then, and since, I have always thought about how she talked to young people, as an educator, on an equal level. It went back to her first job as a junior school teacher in Tintwhistle in the North of England. How lucky we have been to keep learning from her.”

“This is terribly sad news. Rest in peace Dame Vivienne Westwood. She was a reckoner who pushed the needle of British fashion and continued in that fearless original spirit her entire career. She tore apart notions of femininity and, and was one of the first to demand that fashion do better in regards to the climate—and without a doubt was one of the most effortlessly original people I’ve ever met. Fashion, art, and culture will mourn this loss of a gargantuan woman who shaped how we wear and what we wore.”

“Vivienne Westwood shouldn’t be summed up by a trite Instagram caption. She can’t be—you couldn’t even sum her up in a whole fucking book. Through punk, she fundamentally affected the way humanity looks at culture, shifting far more than dress. But when it comes to dress, her work was revolutionary. Alongside Gabrielle Chanel and Yves Saint Laurent, her work has had the greatest impact on modern clothing. Although ‘modern’ is a word she loathed. Maybe ‘fashion’ was too—because Westwood constantly chafed at the restrictions of fashion, because she always wanted to communicate something bigger, somehow more vital than just how you look. She said it best herself: “You have a more interesting life if you wear impressive clothes.” Hers were the most impressive.”

“Without Vivienne no Rei, John, Lee, and a hundred others. She changed my life when we first met in 1976. Forever. You were the Queen. Thank you for all you gave us.”

“Seems like two lifetimes ago at 16 years old that I took my cigarette breaks from the hairdressing salon next to Vivienne’s shop. I felt like Charlie staring through the gates of Willy Wonka’s chocolate factory. I never knew Vivienne, I never met her once, and yet she seems to have been on my mind since I was a kid. Farewell, Vivienne Westwood—it’s been really fun.”

“We are devastated to hear of the death of British designer and activist Vivienne Westwood who has died aged 81. Through her creativity and innovation, she has led the way, inspiring others to be themselves. A fashion revolutionary, her work not only changed the fashion industry—giving birth to and defining punk—but it also drove positive change globally. Her legacy will define generations to come. Our thoughts are with her family and friends.”

“When I was 20, Vivienne’s runway show with pieces of Sex, Seditionaries, and World’s End was held. I was a student at Bunka Fashion Collage then, and Hiroshi Fujiwara let me join that show as a model. At the end of the show, when Vivienne was about to greet everyone, she took my hand and started walking together to the end of the runway.

I was astonished at that moment, but I felt great joy that the mother of punk took my hand. She made a movement called “punk”—connecting rebel music and fashion with Malcolm McLaren—and significantly influenced me. I hope to pass Vivienne’s punk spirit to the next generation in my way, even a little. Rest in peace.”

“I wonder if Vivienne Westwood rode the bike this week. I remember sewing a Lycra swimsuit on a straight stitch domestic machine for Vivienne in Paris on one of my first visits there for fashion week in 1982. I also used to buy tons of it as a teen, from the Pirate to Technological Savage to Witches, through to Buffalo Gals collections, and when Azzedine was supporting her work with shows at his atelier in Paris—endless memories of awareness, investigation, and anticipation for how she’d next evolve the template. I was even in the Buffalo Gals video as Malcolm McLaren scooped us up for it at the time.

It’s great when you think of how much hedonism informed her rebellions. So much to unpack and review with her legacy. Vivienne is huge and always will be. This adorable pic of her with sons Joe and Ben reminds me of knowing them so innocently while being obsessed with Vivienne’s work as a teenager and throughout… I think I first heard of the term salon in artistic terms while listening to Viv—so much curiosity and questioning within her experimentation. Thank god for Vivienne Westwood. Condolences to all your loved ones. Hope they keep your character central to what’s to come! I know this has to happen, but really wish it wasn’t Vivienne. This one caught us by surprise. Now truth, honesty, and questioning are more valuable than ever seeing that we’ve lost a heroine of its order.”

Paula Mihovilovic conjures couture from the fashion spectres of her past